When getting the Mosaics in was a sign of wealth. 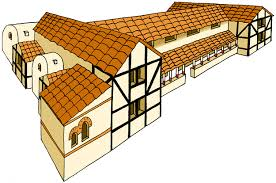 No self respecting Romano-Britain wealthy person would be without a mosaic in their home. There was a great trade for the artisan mosaicist and their visions. They would work in their studios meticulously applying the same pieces of stone and Marble Tiles  to a hessian sacking covered with a cement. We have discovered quite  a bit about the lives and workings of the mosaicist and how they provided the flooring for the many villas and townhouses that sprung up during  the Roman Empire’s occupation from the 2nd to the 5th Century. 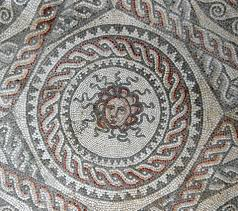 We are lucky to have quite a few examples, which shows the level of craftsmanship involved. Most of them have been levered up and taken to museums but some are still “in situ” like those at Chedworth, Littlecote and Bignor. The rich Romano-Britain needed something to lay on top of their hypocaust. This was a heating system that warmed the floor of the mosaic.

Originally it was thought that the mosaicist would come out to the villa and painstakingly place each piece as per the buyers demands. However, it now seems that they would produce mosaics prior to this and sell designs. The mosaic was then carted out to where it was to be installed in slabs and stuck together with cement.