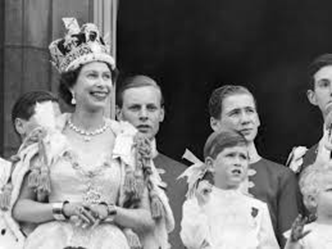 The 1950’s was a huge decade of change in the UK. As the country began to recover from the economic and psychological hardship of the Second World War, people started to look to the future to rebuild their homes and their lives and to embrace the new inventions as well as an economy that was starting to improve as the rationing and austerity measures started to come to an end.

One of the greatest changes that society saw during the 1950s was the introduction of television – television had been about before the war but broadcasting was stopped, so in the post war Britain, more and more people started to take an interest in this new part of family life.

At the beginning of the 1950s, only around 350,000 households owned a television, but by the end of the decade, that number had increased so that over 3 quarters of households had one.

One of the most notable events that led to a huge interest in purchasing a television was the coronation of Queen Elizabeth II – As this event was going to be televised people all over the country, for most for the first time, would not only be able to  see their monarch, but also watch one of the most important events in British history happen before their eyes.

Today, television is still as popular as ever – companies like this TV aerial repair Cheltenham based company are still busy, and despite the very different way that we enjoy television now, it is still one of the favoured forms of entertainment for British families.